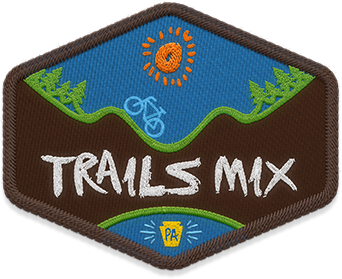 Trail hopping in the Alleghenies, southcentral PA, is equal parts water, forest, and a bit of railroad lore. It's a hiker and biker wonderland, with endless trail combinations to explore, and a place for solitude and a bit of sightseeing on the side. Over the river and through the woods and around the Horseshoe Curve — these trails really mix it up.

Load up the bikes and head to Rock ‘N’ Ridge in Blue Knob State Park, named for its majestic dome-shaped mountain, which happens to be the second highest mountain in PA. With 18 miles of trails for hiking and many designated trails for biking, there is much to enjoy and experience at this state park. Try the Chappells Field Trail for a great beginner’s challenge or the Crist Ridge for the more experienced.

Walk a few blocks over to Twelfth Avenue and you'll see the Mishler Theatre, built in 1906. The history is worth the stop, and you'll understand why it used to hold its own with Broadway attracting the top stage, opera, and concert hall talent.

On Fourteenth Avenue you'll get a taste of the magnificent homes built in the late 19th century, thanks to all the railroad money. Stroll along the old Victorians, Gothic Revivals, and Queen Annes, admiring the past and how it still holds up today.

There are two ways to get to the Horseshoe Curve — a uniquely shaped railroad track. One is the Funicular, an incline plane that'll take you to the top of the hill. Second is hiking there. Both methods are camera-worthy and a great way to take in the incredible engineering feat of it all. And to think it was built in 1854!

No, not the railroad tracks again. It's the local minor league baseball team — the AA affiliate for the Pittsburgh Pirates™. Catch a game under the lights in what's widely considered the finest minor league ballpark in the country. With the Allegheny Mountains as a backdrop, there really isn't a more scenic or intimate way to watch a baseball game.

First things first. Grab a homestyle breakfast at Donna's Family Restaurant off Route 22 or a gourmet coffee on-the-go at Downtown Joe's drive-thru — you'll need your energy for Raystown Lake. The massive freshwater lake offers a half-mile walk along the Hillside Nature Trail. Later you might stroll along the 4-mile loop of the Old Logger’s Trail and look at exhibits on forest management practices or test your strength on the 26-mile Terrace Mountain Trail around the eastern length of the lake. Prefer mountain biking? Ride the 36-mile stacked-loop Allegrippis Trails at Raystown Lake for a fun, flowy bucket-list trail ride.

After a lunch in downtown Huntingdon at one of nearly a dozen restaurants in a 6-block area, head for the massive flagpole overlooking the town for a hike or mountain bike ride on the Flagpole Hill Trail system that connects to Juniata College's Elizabeth Baker-Evans Peace Chapel. The Peace Chapel is an open-air stone circle designed by world renowned architect Maya Linn for meditation and finding harmony with the natural surroundings.

Looking for something a little more hard-core? Two of Pennsylvania's recent "Trails of the Year" have significant distance along Huntingdon County's ridges and valleys. The 80+ mile Standing Stone Trail connects Cowans Gap State Park in the south to Greenwood Furnace State Park and the Rothrock State Forest in the north. The most popular segment of the SST is the Thousand Steps between Mapleton and Mount Union. These hand-laid stone steps climb Jack's Mountain on the north rim of Jack's Narrows, one of PA's deepest gorges. The steps themselves were first established by quarry workers in the 1930s as their daily commute to work from the communities along the Juniata River up to the ganister rock quarries at the top of the ridge. The SST was awarded PA's Trail of the Year status in 2016.

The 2019 Trail of the Year is the Mid-State Trail which snakes a path the entire breadth of Pennsylvania from the Maryland line to the Finger Lakes region of Upstate New York. This ambitious backpacking trail traverses about 50-miles through Huntingdon County mostly following the ridge of Tussey Mountain until it intersects with the aforementioned Standing Stone Trail in the lush Rothrock State Forest before continuing northeast through Centre County.