8 Architectural Marvels in Pennsylvania to Explore

Pennsylvania’s history is built into its civic buildings, educational facilities, and private homes. Discover eight architectural wonders, each relating a chapter of the state’s storied past. Now is the perfect time to explore these amazing buildings on a road trip through the Keystone State — whether virtually or in person. Remember to check before hitting the road to see if your destination is open to visitors and of any special restrictions.

Journey The Mercer Mile to learn about the amazing life and times of Henry Mercer – artist, archaeologist, and tile maker. Along the way, admire his home, Fonthill Castle with its 44 rooms covered in decorative ceramic tiles. Next stop: Moravian Pottery & Tile Works Museum – Mercer’s Spanish Mission-style factory that still produces handmade tiles and mosaics in the same style of his original designs. Your tour ends at the aptly name Mercer Museum, the home of Mercer’s vast collection of pre-industrial American culture with eight virtual exhibits where you can learn about the museum and the fascinating history of Bucks County. 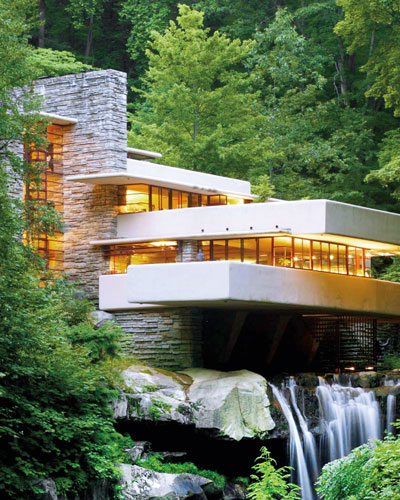 Frank Lloyd Wright’s architectural genius is on full display in the homes he designed. Cantilevered over the rushing waters and waterfall of Bear Run, his most well-known work and architectural masterpiece, Fallingwater, is the ultimate showcase of Wright’s unique ability to seamlessly connect architecture with its environment. In 2019, it was inscribed as a UNESCO World Heritage site.

Just six miles from Fallingwater is Kentuck Knob, one of the last homes completed by the country’s greatest architect, Frank Lloyd Wright. Both dramatic and serene, the house is situated just below the crest of a hill, making it appear almost part of the mountain itself with cantilevered overhangs and great expanses of glass. 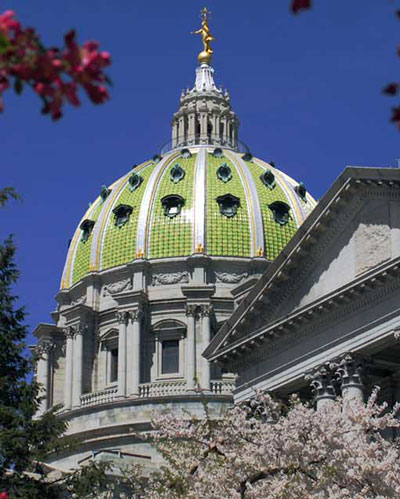 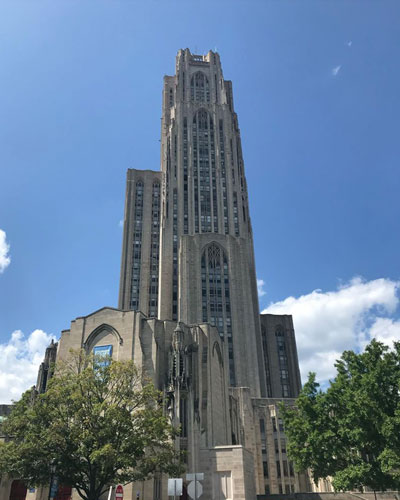 Using steel and stone, Charles Klauder erected the Cathedral of Learning — a Gothic building of sweeping proportions on the University of Pittsburgh campus — to symbolize that “education was the result of aspiring to new heights.” The 535-foot-tall Cathedral has maintained its status as the tallest educational building in the U.S. and the second-tallest in the world. Take a virtual tour of the building’s 30 renowned international rooms.

The rigorous simplicity of architect Ludwig Mies van der Rohe can be seen at Duquesne University’s Mellon Hall of Science. Overlooking the Monongahela River, the building is considered one of Pittsburgh’s top architectural gems, showcasing the famed architect’s use of austere building materials and totally symmetrical Modernist design. The building is still in use today by faculty and students in the school’s chemistry and biochemistry department. 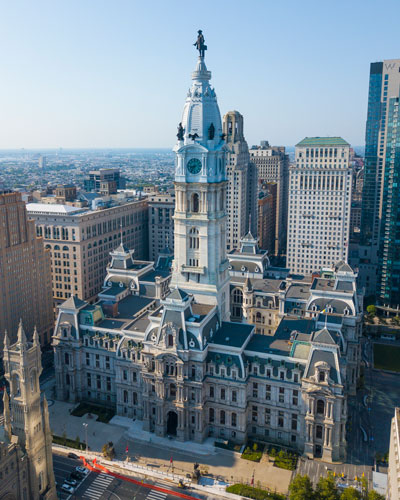 Constructed in the late 1800s, Philadelphia’s City Hall is perhaps the largest and most elaborate seat of municipal government in the nation. Housing the offices of the mayor and city council, City Hall is open for citizens and visitors alike to explore through guided tours of the interior and its famed tower (weather permitting) with its panoramic view of the Benjamin Franklin Parkway and city skyline from the city’s highest open-air observation deck.

Architect Louis Kahn believed that his Erdman Hall Dormitories, a dormitory for girls built on the campus of Bryn Mawr College, should be designed less as a dorm and more as a house. The modern Scottish castle constructed of slate and concrete contains three connecting units or square structures with inner public spaces and outer student rooms.