Happy Travelers are explorers at heart and relish discovering off-the-path relics that turn an afternoon jaunt into an adventure. Pennsylvania is packed with history, and not just in the obvious spots — if you know where to look, you can encounter the archaic structures left to the mercy of the wilderness. These 11 trails will lead you to storied ruins and a look into the past.

With 19.5 miles of trails, Valley Forge National Historical Park is a great hiking destination in its own right, but for those looking to wander into the past, this national park has just the spot! As you ascend Mount Misery on the Horse-Shoe Trail – the yellow blaze – in Montgomery County, you can walk through the stone remains of the old Colonial Water Bottling Plant.

Pymatuning State Park in Crawford County has more than 17,000 acres, including seven miles of hiking and biking trails — some of which lead to an abandoned campground and a railroad grade. Follow the multi-use Spillway Trail to check out the railroad or go down the Fries Road Trail to explore the abandoned buildings and beach at the Tuttle Point campground, which closed in 2010. 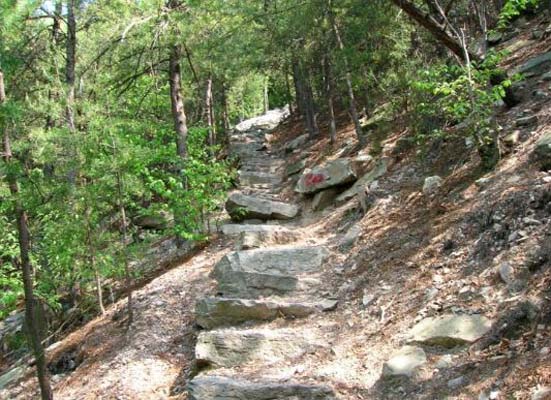 The Thousand Steps of the Standing Stone Trail were constructed in Jack's Narrows in 1936 by quarry workers for the Harbison-Walker Refractory Company to access their job site at the top of Jack's Mountain in Huntingdon County. Today, the Thousand Steps section is a popular spot for hikers. The steps lead you by the old dinkey grades used to haul the stone down the mountain on small trains. You can see the concrete Dinkey House that used to house the locomotives, plus other leftovers of the old quarry operation. 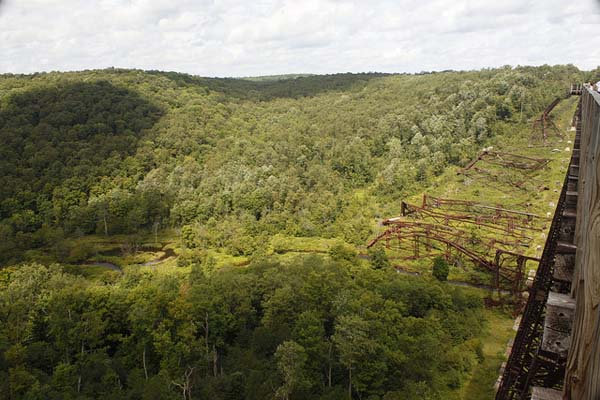 Ready for a bit of a challenge? The Kinzua Creek Trail is a one-way, 0.4-mile hiking trail that descends a difficult path to the valley bottom of the Kinzua Viaduct in McKean County. At 2,053 feet long and 301 feet high, the Kinzua Viaduct was once known as the longest and highest railroad structures in the world until 2003, when the bridge was partially destroyed by a tornado. On the Kinzua Creek Trail, hikers can the remnants of the fallen towers as well as the breathtaking skywalk.

Types of ruins: Remnants of the Kinzua Viaduct 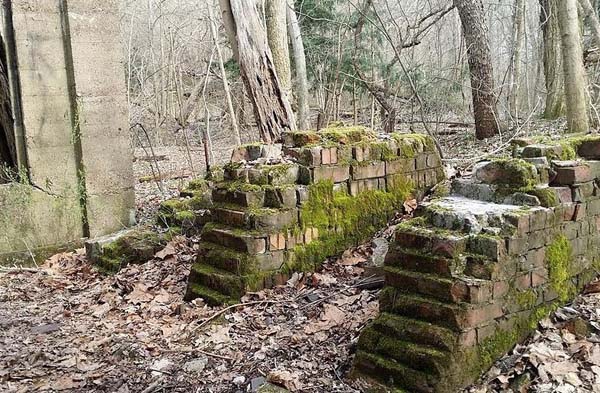 Walk through nature and step back in time in McKeesport. Dead Man’s Hollow Conservation Area once was the site of a 19th century quarry and early 20th century pipe factory. Today, nature has reclaimed the industrial area of the Hollow, and hikers can take the 0.32-mile Ruins Trail – orange on the trail map – to see the remaining structures of the factory that operated in the Hollow 100 years ago. For other noteworthy Insta pics, follow the Witch Hazel Trail to climb the Enchanted Staircase, snap a photo with the Three Trunk Sycamore Tree, or view Table Rock – an unusual siltstone formation. 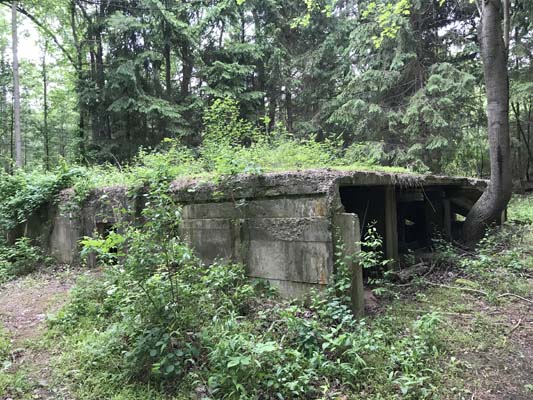 Tucked away in Michaux State Forest in Gardners, adventure seekers can discover a popular spot for iron ore extraction, but a portion of it — now known as Camp Michaux — was eventually redeveloped into a Civilian Conservation Corps during the Great Depression. During the throes of World War II in 1942, it was repurposed as the Michaux Prisoner of War Camp. Today, explorers can hike the Sunset Rocks Trail to see the stone ruins of a barn from the site’s POW days. 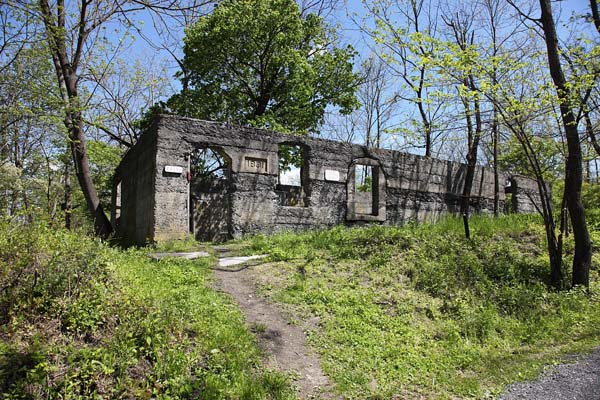 Located on a redeveloped railroad bed, the Ironton Rail Trail weaves through the industrial past of Lehigh County. The more than nine-mile looping trail travels by two rows of 90-foot cement kilns in Saylor Park, which were used in the production of cement. For even more historical ruins, the 3.5-mile spur offers a look into the area's cement manufacturing heritage, passing through scenic Whitehall Parkway where ruins of old buildings are sprinkled throughout. 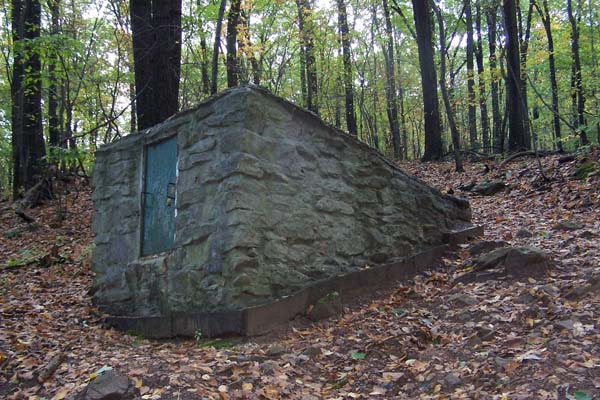 In the Laurel Highlands, Flat Rock Trail at Linn Run State Park is a short half-mile walk in the woods which will take you by the stone remains of a stone hunting camp. Now abandoned, the structure is a great place for exploration and a few broody shots for your Instagram. The trail culminates at a large flat rock (named for the trail), which juts out of a stream.

Just outside the quaint town of Austin sits a vivid reminder of one of Pennsylvania’s worst disasters: the Austin Flood. On September 30, 1911, poor construction and torrential rain caused the dam to collapse, releasing nearly 400 million gallons of water that destroyed the town. At the Austin Dam Memorial Park, hikers can see the remains of the old dam and walk the trails that run along the former Bayless Pulp and Paper Company ruins.

Types of ruins: Remnants of an old dam and a paper mill company

Once the site of a thriving coal and railroad town in the late 1700s and early 1800s, the Lausanne Ruins are all that remain of a once-bustling coal and railroad town. A few foundations of former houses in Lausanne still exist but are slowly being reclaimed by nature. For those seeking an adventure through the wilderness, this ghost town near Jim Thorpe should be on your bucket list!

Types of ruins: remains of a forgotten town

For the last spot on our list, bring your pooch! Rolling Hill Park in Gladwyne takes you and your four-legged friend on a 3.5-mile loop past the stone remains of buildings that housed former millworkers before the turn of the century. The Blue Trail is sure to give a glimpse of days gone by.

Types of ruins: Remains of the Mill Creek tenement houses