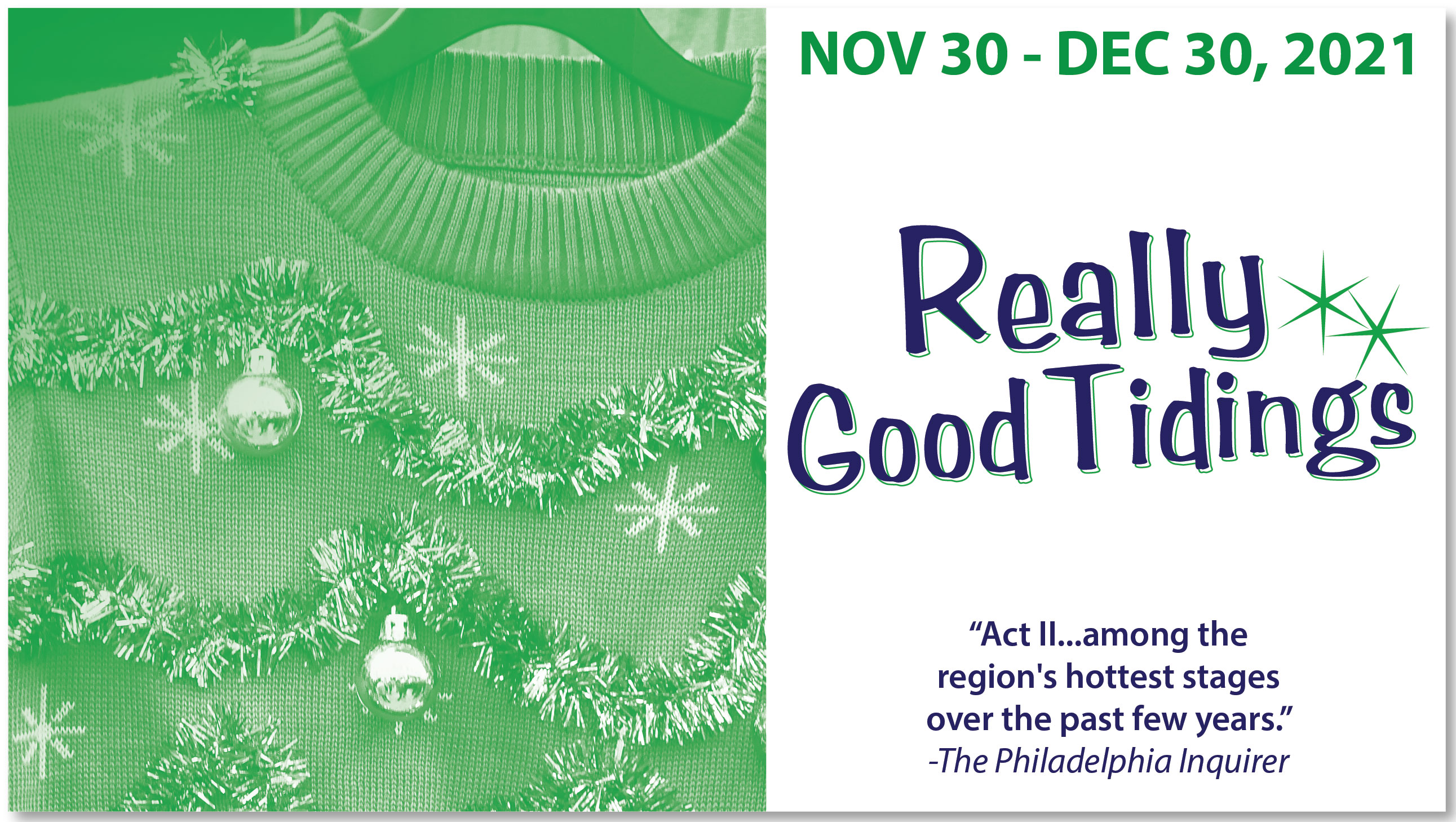 Repeats: Every Day (day of week)

Act II Playhouse in Ambler, PA announces its return to a Mainstage Season with “Really Good Tidings,” a hilarious, holiday-inspired new variety show. “We are thrilled to be back in front of live audiences with a new show,” said Tony Braithwaite, Artistic Director. “We opened to smaller houses earlier this fall with very successful evenings of live music and stand-up comedy, and we’re ready to welcome patrons to full productions.” “Really Good Tidings” runs for 28 performances with Previews Nov. 30 through Dec. 2, Opening Night Dec. 3, and additional performances through Dec. 30. “We wanted to launch the first production of our five-show season during the holidays when families and friends return to their tradition of going to the theatre, or just need a fun night out,” continued Braithwaite. “We’ve worked through our safety procedures and patrons have been both grateful and helpful in making sure everyone feels comfortable returning to live theatre.” Single tickets start at $32 and are available online at act2.org, by calling the Act II Box Office at 215-654-0200, or in-person at the Box Office at 56 E. Butler Ave., Ambler, PA. The Box Office is open Mon-Sat., 2PM - 6PM. Student tickets are $15 and group discounts are available. Subscriptions are also available. We are ready with festivities for the whole family (well, teens and up)! Grab a sweater and join Tony Braithwaite and a chorus of Act II favorites to kick off your holiday spirit! We'll deliver a hilarious, new variety show that will keep you laughing all the way. There'll be sketches, songs, and improv but ya' better watch out - you may be part of the show! “Really Good Tidings” is written and performed by a multi-talented ensemble that includes Tony Braithwaite, Renee McFillin and Kevin Toniazzo-Naughton, with Daniel Matarazzo as Music Director. Braithwaite is also directing. “Really Good Tidings” is Renee McFillin’s debut at Act II Playhouse and she has been seen most recently at Bucks County Center for the Performing Arts, Montgomery Theater, and the Pennsylvania Shakespeare Festival. Kevin Toniazzo-Naughton was most recently seen at Act II Playhouse in “Camelot” and has performed regionally at Bucks County Center for the Performing Arts, Resident Theatre Company, Farmers Alley Theatre, Walnut Street Theatre, Gretna Theatre, Lancaster Opera House, and Bristol Riverside Theatre, among many others. Daniel Matarazzo was most recently the Music Director for the Act II Playhouse productions of “Heeere’s Tony!” and “Electile Dysfunction: Hindsight is 2020” and he works as Music Director at area high schools, universities, and regional theaters, including Cabrini University, Temple University, Upper Darby Summer Stage, and 11th Hour Theater Company. Tony Braithwaite is the Director, Alex Dakaglou is the Sound Designer, and James Leitner is the Lighting Designer. Braithwaite added, “We wanted to return with a brand new show that was going to lift everyone’s spirits, make them laugh and would remind us all of what we love about live theatre. We’re so excited to be back on-stage this holiday season!” Act II Playhouse is committed to creating and producing new, classic, and contemporary plays and musicals that reflect the highest artistic standards, and presenting in a venue whose intimacy draws audiences and actors into dynamic interaction. Act II is committed to theatrical work that is both accessible and entertaining. Act II Playhouse was founded in 1998 and in 2012, Tony Braithwaite became the third Artistic Director in the Company’s history. The Company has received 39 Barrymore nominations and six Barrymore Awards, two in 2010 for Outstanding Ensemble in a Musical (Tony Braithwaite & Jim Stanek in The Story of Life) and the Independence Foundation Award for Outstanding New Play, Bruce Graham's Any Given Monday (a co-production with Theatre Exile). Act II also received the 2006 Charlotte Cushman Award for Outstanding Leading Actress in a Play (Susan Riley Stevens in Bad Dates), the 2005 Best Actor in a Musical Award (Tony Braithwaite in The Big Bang), the 2004 Outstanding Lighting Design Award (James Leitner, Mary’s Wedding), and the 2003 Outstanding Lead Actor in a Play Award (Kraig Swartz in Fully Committed, a co-production with Philadelphia Theatre Company).