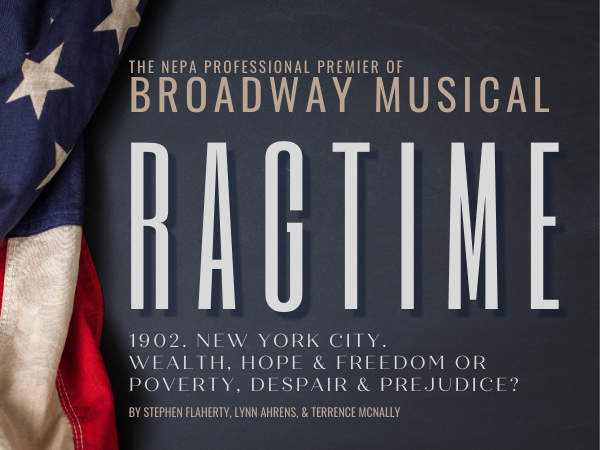 Scranton Shakes offers the NEPA's professional premier of Broadway Musical - Ragtime. Ragtime is a captivating musical representing the American experience at the turn of the 20th century. Follow three diverse families in pursuit of the American dream in the volatile “melting pot” of New York in the 1900s. Watch the worlds of a wealthy White family, a Latvian immigrant father and his daughter, and an African American ragtime musician intertwine. Together, they discover the unexpected mutual connection of love, the restrictions of justice and the heartbreaking consequences when dreams are permanently deferred. Featuring many of the historical figures that built and shaped turn of the century, including Booker T. Washington, Emma Goldman, Evelyn Nesbit, Harry Houdini, Henry Ford and J.P. Morgan, this musical encompasses a wide range of issues unique to the American experiment, creating an inspiring epic that dances to the beat of transformation, “giving the nation a new syncopation, the people called it Ragtime.” Performed on outdoor stages at Scranton's historic Iron Furnaces - built in 1848! This unique venue not only offers an exciting theatrical experience, but also the peace of mind that comes with mindful, socially distanced, outdoor entertainment. Age restrictions: 12+ due to some violence and racial epithets