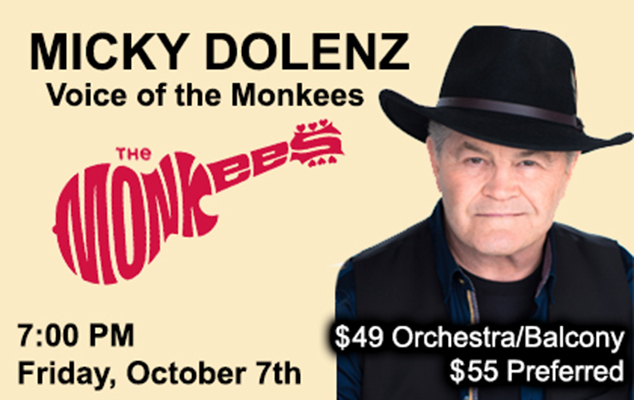 Micky Dolenz – Voice of the Monkees

Micky Dolenz is the voice of The Monkees. The unmistakable lead singer and drummer of the 1960’s band that moved a generation and led this pop culture phenomena to a dozen Top 20 singles, four #1 albums and two Emmy Awards. Having entertained audiences his entire life, Micky brings a one-of-a-kind presence to the stage, along with his touring band, drawing on his background in television, film broadcasting and Broadway. Fans of this former teen idol will certainly remember “I’m A Believer,” “Valleri,” “A Little Bit Me, A Little Bit You,” “Last Train to Clarksville,” “(I’m Not Your) Steppin’ Stone,” “Daydream Believer,” and “Pleasant Valley Sunday.”