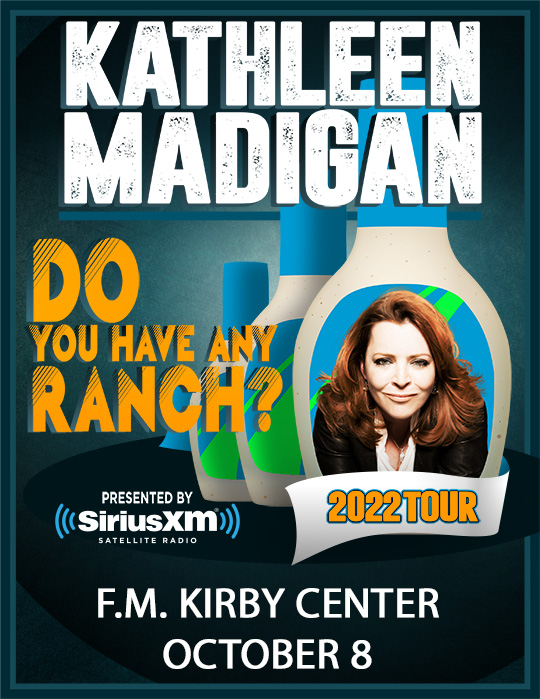 Due to popular demand, Comedian Kathleen Madigan announced today 17 additional dates for the Do You Have Any Ranch? Tour, including a stop at the F.M. Kirby Center on Saturday, October 8 at 8pm. Comedian Kathleen Madigan's 32-year comedy career is showing no signs of slowing down as she tours 250 nights a year performing in marquee theaters around the country. Madigan has squeezed in over 40 appearances on late night talk shows and multiple comedy specials airing on Netflix, Comedy Central and HBO. She has also appeared on Jerry Seinfeld’s Netflix popular Netflix series, Comedians in Cars Getting Coffee and made the most of the pandemic by launching a podcast, Madigan's Pubcast, on all streaming outlets. Her most recent special, Bothering Jesus is her fifth hour long stand-up special and third special available on NETFLIX, and was also the highest selling comedy album and most played comedy album on streaming services since 2014. The comedian will shoot her sixth stand-up special at the Paramount Theatre in Denver, CO June 4th, 2022. She's won the American Comedy Award for "Best Female Comedian" and the Phyllis Diller award for "Best Female Comedian." She has written and produced for Lewis Black's Root of All Evil on Comedy Central and done multiple USO tours in Iraq and Afghanistan. Madigan has performed internationally at festivals in theaters in Ireland, England, Hong Kong, Australia and has filmed seven Montreal Gala Shows at the Just For Laugh’s Comedy Festival for CBC TV. For more info on the tour and podcast go-to: www.Kathleenmadigan.com