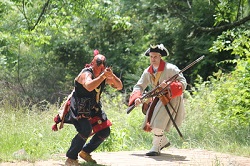 Become an eyewitness to history, as the Colonial Pennsylvania Plantation becomes the backdrop for scenes from the French and Indian War. It’s the French and British fighting for control of the frontier, and it is taking place on Saturday, June 19th . Watch the local militia lead by a Rodger’s Ranger as they discover a French raiding party and witness the skirmish which ensues. Visit the French and British campsites. Talk to the soldiers about their uniforms, weapons and strategy for fighting in the wilderness of the frontier. As you take in the action, remember that the French and Indian War determined not only the future of the Pennsylvania frontier but also events that put the loyal colonials on a path to revolution. There will also be demonstrations of hearth cooking, woodworking, and other everyday activities of the colonial time period.