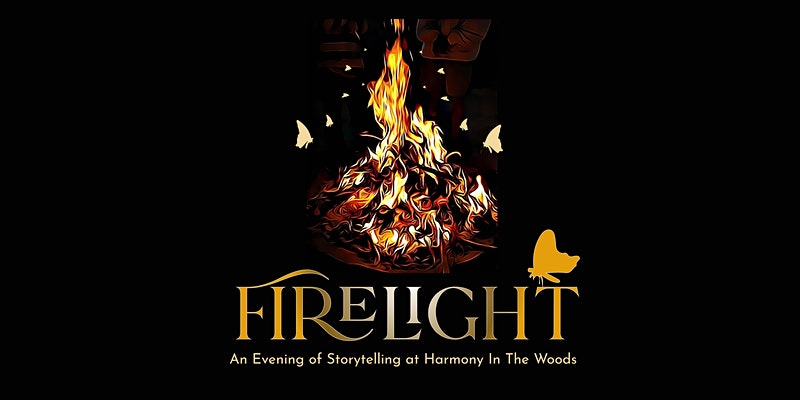 FIRELIGHT: Storytelling at Harmony in the Woods (Friday Only)

"FIRELIGHT: Storytelling at Harmony In The Woods (Friday Only) | Friday, Aug 6, 2021 Harmony In The Woods | On Rt 6 in Hawley, PA, next to North of the Border Fireworks The two-day festival, Aug. 6 and 7, will feature stories each night told to a particular theme. On Night 1, the theme will be “It’s Getting Hot in Here,” tales of warm weather and other sultry subjects. On Night 2 -- with a nod to those face coverings we’ve all been wearing for so long -- it’s “Unmasked,” stories of identity, perception and misperception. Get Tickets For Both Nights Get Tickets For Saturday Only, Aug 7th - ""Unmasked"" The lineup includes some of the biggest names in the storytelling and comedy worlds: --NEGIN FARSAD was named one of the 53 Funniest Women by Huffington Post, and her TED Talk on social justice comedy has been seen by millions. She is author of “How to Make White People Laugh,” host of political comedy podcast “Fake the Nation,” a regular panelist on NPR’s “Wait Wait Don’t Tell Me,” and regular co-host on Neil DeGrasse Tyon’s ‘StarTalk.” You can see her on Adult Swim's “Birdgirl,” on HBO's “High Maintenance,” on the Disney+ show “Year Million” and others. She wrote/directed “The Muslims Are Coming!” (Netflix) with Jon Stewart and David Cross. Her latest feature, “3rd Street Blackout,” is on Peacock. --JAMES BRALY is the first two-time winner of the Moth Grand Slam, a contributor to public radio’s “This American Life” and a regular at Out by Ten and other storytelling venues. His one-man stage show, “Life in a Marital Institution (20 Years of Monogamy in One Terrifying Hour,” played to rave reviews in New York and toured the country; he also recounted the tale in a memoir of the same title published by St. Martin’s Press. --MICHAELA MURPHY has appeared on the Moth Mainstage, at TEDxBarnardCollegeWomen and numerous other venues, and is a highly regarded speech and performance coach. She hosts her own regular storytelling show, “Word of Mouth Live!,” at the Bucks County Playhouse, where she is director of education. --NEIL GENZLINGER is a three-time Moth Open Slam winner; has appeared at Out by Ten and other storytelling venues, including the legendary Halloween Dinner at the Settlers Inn in Hawley; performed his own one-man show, “Three True Stories: Tales From a Flummoxed Fatherhood,” at the Midtown International Theater Festival; and has had several shows in the New York International Fringe Festival, including an adaptation of “The Last Detail.” He works at the New York Times, where his jobs over the years have included theater, film and television critic. --AMY EDGAR is a nurse practitioner at the Children’s Integrated Center for Success in Allentown, Pa., and has been featured at the annual Nursing Story Slam at the University of Pennsylvania. The show will also feature an impromptu audience-participation element (but don’t worry; no onstage appearance required). Have a good story that relates to the evening’s theme that can be conveyed in one sentence? It might be good enough to win $100. Interested in purchasing tickets in person? Beginning July 1, tickets will be available for purchase Thursdays and Fridays from noon to 4:00 pm at 508 River Street • Hawley, PA 18428. Tickets will also be available for purchase on-site at Harmony In The Woods an hour before showtime. Call 570-588-8077 for help purchasing tickets or questions about the show. Logistics: * Please bring your own chair/blanket, drinks and snacks. Bug-spray is also encouraged. *Doors open a half-hour before showtime. Audiences will not be permitted on site until this time. *No refunds will be issued, except in the case an indoor alternative local venue has not been identified, and disruptive weather is expected. Eventbrite fees (usually between $2-$5 depending on ticket price) are non-refundable. *The spacious outdoor setting of Harmony in the Woods naturally lends itself to social distancing. Regardless, Harmony continues to follow CDC guidelines and recommends wearing a mask even if fully vaccinated, except while actively eating or drinking. According to US News and World Report, ""The CDC still recommends vaccinated people wear masks in crowded outdoor settings like concerts where social distancing might not be possible and unvaccinated people might be in attendance."""