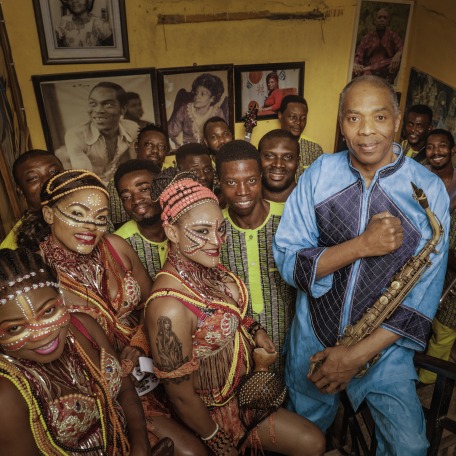 The legendary Femi Kuti and his troupe, The Positive Force, bring a very special performance to Downstage @ the Mann this summer! Join us as they bring the spirit of Africa to our stage on Saturday, July 16. After the performance, stay for an on-stage dance party featuring an exclusive DJ set from Oluwafemi, filled with funk, Afrobeat, old school soul, and early hip hop. Before Femi was his own bandleader, he started playing saxophone in his father — Fela Kuti's — band, Egypt 80, in 1979, where he learned the ins and outs of performing with a legend. “My father was so huge,” Femi says with a laugh. “I taught myself everything I knew, so I was learning on the job, and you are not allowed to make mistakes. Being in front of such an icon, it can be intimidating.” In 1984, Femi had no choice but to fulfill his destiny after Fela was arrested at the Lagos airport just before the start of a U.S. tour and Femi was asked to be the frontman of his father’s band instead of cancelling the shows. From that day on, he’s never looked back. In 1986, Femi formed his own band, The Positive Force, which quickly gained notoriety as a formidable group in Afrobeat music. His self-titled ﬁrst record was released in 1995 by Tabu/Motown, and has since followed a long journey, where he continues to expand the diversity of his artistry on most of his albums, bringing him a total of six GRAMMY® nominations.