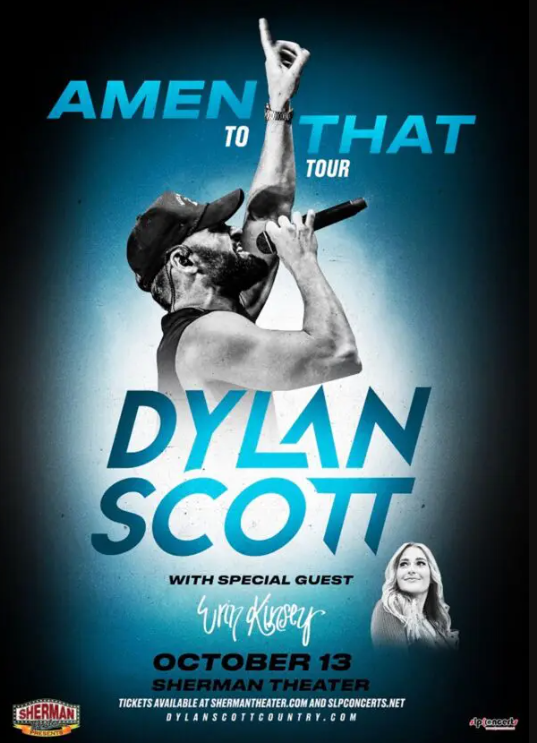 Dylan Scott - Amen To That

The “Amen To That Tour” will bring brand new cuts from Scott’s upcoming album, Livin’ My Best Life, live to the stage for the first time. Arriving Aug. 5, 2022, Livin’ My Best Life is the follow-up to the hitmaker’s Nothing To Do Town EP. Produced by Will Weatherly, Matt Alderman, Jim Ed Norman, Curt Gibbs and Mark Holman, the LP delivers a personal set filled with the backroads, barstools and church pews that defined the Louisiana native’s youth. Scott co-penned eight of the album’s 16 songs, whose credits boast an all-star lineup of writers like Tyler Hubbard, Brian Kelley, Morgan Wallen, Thomas Rhett, and more. Notable tracks include fiery heartbreak single “New Truck,” unifying anthem “In Our Blood (feat. Jimmie Allen)” and viral TikTok ballad “Can’t Have Mine (Find You A Girl).” Curb Records recording artist Dylan Scott is a triple threat — a powerful vocalist with a deep, unmistakable drawl; an old-soul songwriter with a young spirit; and a family man with a tender heart. The multi-Platinum singer has notched two No. 1 singles at radio (“My Girl” and “Nobody”), as well as Top 5 hit “Hooked.” Following his first career nomination for “Best New Country Artist” at the iHeartRadio Music Awards, his Platinum-certified ode to his wife, “Nobody,” earned him a 2021 CMT Music Award for Breakthrough Video of the Year. The Louisiana native has provided tour support for Garth Brooks, Luke Bryan, and Chris Young, among others, cementing him as an in-demand live act. Livin’ My Best Life, the follow-up to his chart-topping Nothing To Do Town EP, releases Aug. 5, 2022, and features fiery lead single “New Truck” and viral TikTok ballad “Can’t Have Mine (Find You A Girl).” Texas native Erin Kinsey may be a country music newcomer, but she’s been hard at work since she was 11 years old. Now 21, she is the epitome of a 10-year overnight success who has established herself as a Nashville singer-songwriter with a bright future ahead of her. Having moved from Texas to Tennessee the morning after her high school graduation, Kinsey quickly immersed herself in country music, and in return she was embraced by music insiders who’ve helped her reach her larger-than-life goals. And so far, so good. She consistently receives close to ten million views when she posts an original song on TikTok, and her debut single, “Just Drive,” is impacting country radio now. The song has been featured on SiriusXM The Highway “On The Horizon” and has over 34 million streams and views to date and counting. Kinsey is signed to RECORDS Nashville, a joint venture with Sony Music and her debut EP, 40 East, released on March 25, 2022. Where she goes from here is just about everywhere. Dylan Scott Meet & Greet VIP Experience Includes: One general admission or one premium reserved ticket One pre-show M&G with Dylan Scott One individual photo with Dylan Scott One pre-show performance with Dylan Scott One limited edition VIP Dylan Scott merch bundle One exclusive Dylan Scott VIP laminate and lanyard Priority entry into the venue